Solid state disk technology is one of the best things to happen to computers and Intel hits a home run with the X25-M SSD.
Tags Storage Intel SSD

The test system for this review consisted of the same system used in the previous »triple vs single channel memory article.

The comparison with a standard 80GB 7200 Serial ATA drive was done to show how much of a benefit a SSD can have over a normal HDD. There are some things that will not be faster including computational performance when the data is easily cached in the RAM. Benefits will be shown when data needs to be transfered to and from the mass storage device.

Lower is better in this instance and the SSD from Intel comes out on top in one of the tests. The network workload pretty much comes out even. The only time the SSD will wipe the floor with a standard drive is in high I/O situations.

In the gaming tests running at 1920x1200, the Intel X25-M pulls out a victory over the standard mechanical Maxtor drive. If the resolution was dropped the lead would probably be higher.

On the compilation tests, the X25-M is actually a tiny bit faster than the Maxtor drive. Compilation is rarely disk intensive unless it is something large (maybe the Linux kernel would be good).

Subjectively, the Intel X25-M feels faster overall. Bootup times for Ubuntu were faster by a few seconds and programs loaded much faster than with the Maxtor drive. Using the computer with the X25-M felt like a better overall experience and it is finally good to see the bottleneck in computers becoming less. Hard drives have long been a huge bottleneck and these new SSDs make it a a real treat to multi-task again. Doing anything intensive on the drive doesn't lock performance. You can do multiple operations on the drive with ease, unlike a mechanical drive which suffers. This is how computing should be.

Here is the big problem with the X25-M, the price. The drive costs about $500-$600 at the time of this writing. For 80GB, this is extremely expensive. The cost is very prohibitive in anything but enterprise class hardware. Mainstream users should be looking for prices to drop on SSDs later in the year. We at ASE Labs are projecting a surge in SSDs this year which will push prices much lower. Perhaps in a few months the price will drop to a more manageable level.

As for Intel's technology, it is amazing. The X25-M shows what a good technology company can do when it is done right. Intel has hit a home run with this product and as soon as the price becomes more competitive, these drives will fly out of the factory. The team at ASE Labs really can't wait for it to happen and we look forward to not having mechanical mass storage in our systems. Thank you, Intel. 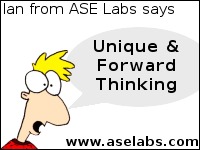