OCZ makes all type of computer products but today the Rally2 Turbo 4GB USB flash drive is up for review and it is really fast.
Tags Storage OCZ Flash USB Rally2 Turbo

OCZ may be best known for their memory products such as low latency and high speed RAM, but they also provide other products with enhanced speed and performance. Their line of cooling products as well as flash memory provide excellent performance in today's market. Today, ASE Labs has the OCZ Rally2 Turbo 4GB USB flash drive for review. Even flash can be dual channel.

Entering the memory market in August 2000, OCZ Technology was built around the determination to manufacture the best high speed DDR and RDRAM. OCZ was founded by enthusiasts, for enthusiasts, and our commitment to the end-user has not digressed. OCZ Technology has been an innovator in many areas. We were the first manufacturer to make Dual Channel optimized memory available to the public, which originally took advantage of nVidia's Twinbank or Dual DDR architecture, found in their nForce chipset. We have now taken that technology and tailored it for the Canterwood, and Granite Bay chipset's. OCZ developed and was the first to implement ULN technology, which has been a critical element in our manufacturing process for some time. We at OCZ diligently work to improve communication with CPU and motherboard chipset manufacturers prior to the release of their products. Only in this manner can we fine-tune our memory's SPD settings, ensuring a synergistic relationship between the memory module, memory controller, and microprocessor. In today’s rapidly evolving semiconductor industry, such communication is not simply research, but a necessary component of our manufacturing process.

OCZ retail packaging claims that this product has "blazing speed!" We'll be the judge of that. OCZ's packaging is mostly black with some orange accents.

A full lifetime warranty and a very impressive speed rating. Plug and play doesn't just mean that it is compatible with a Mac. USB mass storage is a standard in itself and is well supported by all modern operating systems including Windows!

The package includes three things. The Rally2 Turbo, a lanyard, and a USB extension cord. I'm glad to see that this product comes with an extension cord. USB flash drives are a pain to plug in to certain ports on laptops and an extension cable makes this task much easier.

The flash drive itself is black with white lettering and translucent ends. Thankfully, the lanyard hole is built in the drive itself instead of the cap. I never understood why people would want the lanyard to attach to the cap since the drive can fall right off if not tightened properly. The worst that can happen the OCZ drive is the cap gets lost, but you don't want to lose a nice cap like this. The front has the model name which is Rally2 Turbo and the size which is 4GB.

The back contains the OCZ branding and their website. This drive is encased in aluminum that feels anodized and is painted black. It actually feels like a hard plastic until you tap on the surface. Aluminum should hold up in use better than plastic.

The Rally2 Turbo has an orange activity light on the bottom that isn't too annoying. I've seen drives that have the bright blue LEDs and those are ridiculous when in use.

Testing the drive was done using the standard Ubuntu 7.10 (Hardy reviews will come in May with the general release later this month). The system used contained a smattering of components that honestly don't matter since any system should be fast enough to handle the speed of this memory if you have a USB2 port.

Since this flash memory is a USB mass storage device, Linux users should have no problem in using this memory. Ubuntu picked up the Rally2 Turbo and was ready to go in under a second.

How did this flash drive handle in a typical use case? Extremely well. I timed a copy of a 2.9GB tar file and the transfer speed reached 25MB/s which is less than the rated 30MB/s, but is great performance nonetheless. Copying multiple smaller files made the transfer speed fluctuate and dipped to about 20MB/s at some point which is pretty good for a non continuous transfer. Read speeds were excellent. The module pushed about 31MB/s. Again, this is less than advertised, but it is much faster than most flash you'll see on the market today.

Pricing for the 8GB model of this flash drive is $50 at the time of this review. It is well in-line with other products but really stands out from the crowd due to its stellar performance. The OCZ Rally2 Turbo gets the high performance award. It screams past the competition in writing and reading speeds and does it with a good price point to match. If you need a new USB flash drive, OCZ gets my vote for speed. 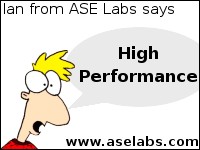 I'd like to thank Lisa Gregersen from OCZ for making this review possible.
Page 1
View As Single Page Print This Page Print Entire Article