Cases aren't built like they used to be unless you get the Armor case from Thermaltake. This full size case lives up to its name and then some.
Tags Cases Armor Thermaltake VA8003BWS

How about a close up of that 250mm fan... It is just big, but that's the working word for this case. Like I say, bigger fans are better since they can pump more air at a lower speed. That means that it ensures a quiet operation with good airflow.

And here is the inside of the case. Notice all the screw holes. This is due to the sheer versatility of the case being able to accommodate many different styles of motherboards include ATX, Extended ATX, and even BTX. Cases haven't done something like that since AT and ATX were both fighting each other. As you can see, there is plenty of room to work in this case.

The back of the case holds the PCI brackets and the 120mm exhaust fan as well as the I/O shield (behind the fan in this picture). The PCI brackets and I/O shields are removable and are sturdy metal instead of the flimsy break away type which I can't stand. This case does it right by having proper blanks. The screwless design for these PCI slots are the best I've used so far.

There is a removable hard drive cage on the top back of the case which an 90mm exhaust fan directly behind it. I think this was a great design feature that allows for better cooling keeping with the 250mm central intake fan. The power supply gets mounted behind this cage so you need to remove it. Don't put the top exhaust fan in until you install the power supply. I made that mistake.

The drive area is pretty much standard. This case has 10 front accessible bays. Like the »Nine Hundred, the Armor comes with a front hard drive cage with a 120mm lighted fan If you have more than three drives, you can use this front mounted cage. I would stick with the back one, though. There is a 3.5 adapter in another bay and the power and LED status bay can also house a 3.5 drive.

For the price of two 5.25" bays you get three 3.5" hard drives with cooling all in one neat package. You need to screw the drives in to the caddy unlike the 5.25" drives which have screwless mounts.

There are connections for all the basics and more. This even includes a speaker and a case intrusion switch. Thermaltake went all the way to make this case really stand out. The wires are all long enough to reach anywhere in the case.

I made a mess with all the wires for a reason. Even with my horrible cable job, there is still plenty of room for more stuff. I could load the entire case up with parts and still have room. This is an Asus P5B Deluxe motherboard which is a standard ATX motherboard. As you can see, it is dwarfed by the case. The screwless design of the 5.25" bays are very well done. They are hinged and you squeeze them to remove and place them on. The one problem I had was the power supply support bracket wouldn't work with my Antec Truepower Duo due to the cabling being in the way. I don't see a reason to use this bracket, but if you are able to, it doesn't hurt to give the case more protection. Remember, Armor is the name.

I would have made the window a bit smaller so I could hide the wires better. If I was using a modular power supply, this wouldn't be an issue. With all these fans, you may think that the case would be loud. This is simply not true. The case is extremely quiet for the amount of airflow due to the use of large fans and slow speed smaller fans. The airflow is excellent even being so quiet. It isn't silent, but the normal CPU fan is louder than the steady whoosh of this case.

The case is fairly well lit with the standard lighting that comes with the case. The 120mm exhaust and 120mm intake fans are both blue LED lit. This gives the base case a nice look. Pay no attention to the purple ASUS light from the P5B Deluxe.

The front shows the insanely bright blue power LED as well as the front intake fan. You can also see the Armor logo in this picture somehow. All in all, this case is one tough act to break. Thermaltake exceeded even my expectations.

The Armor with the 25cm fan costs $150 at the time of this review. This is an excellent price for such a versatile and tough case. I haven't been this impressed with a case in a long time and Thermaltake really delivers with the Armor. It is perfect for the server market, even more-so than the gamers. The Armor keeps to its name being tough and sturdy. Buy this case and you won't be disappointed. 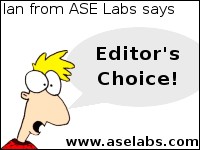 I'd like to thank Ramsom from Thermaltake for providing this case for review.
« Previous Page
Page 1
Page 2
View As Single Page Print This Page Print Entire Article